As a serial entrepreneur, there is something incredibly exciting about the start up.

In the case of the #thepositivepackage and the social business that we (Sami and myself) are building one subscription box at st time is addictive and exillerating, but I have to say that it has been possibly the most challenging business I have ever started to date!  I can see why people step half heartedly into doing great things and giving back, as a lot of the journey when it comes to supporting a non profit but making it a viable win win business for all involved from founders to customers is crazy cool super challenging!

Logistics from a third world county, language barriers, customs and wondering if you have purchased the right mix of treats to promote self love and positivity for your subscriber, along with working in different times zones ...me currently writing this in New Zealand and Sami somewhere between Stockholm and Hawaii ....I think!

When to reveal ... sneakpeaks ...how to tell your story of the experiences that so touched your heart on your purchasing journey to far away lands in social media ...it’s all a constant learning curb,  it one I’m loving!

So..here we go ...a wee  #sneakpeak with a little history and a sweetie pie Cambodian cutie as our scarf model...and NO she doesn’t come in the box. When referring to Cambodia, images which come to your mind were of course the smiles of its inhabitants, the Khmers. Their eyes and smiles contrast with the dramatic history of the country, and with the present situation as well, as Cambodia remains one of the poorest nations in South East Asia. Another image also imposes on first time visitors: the kramas. The scarf and its various patterns are ubiquitous, the real symbol of the country. They are part of the Cambodian history and a legacy passed through generations.

Scarves woven in the countryside 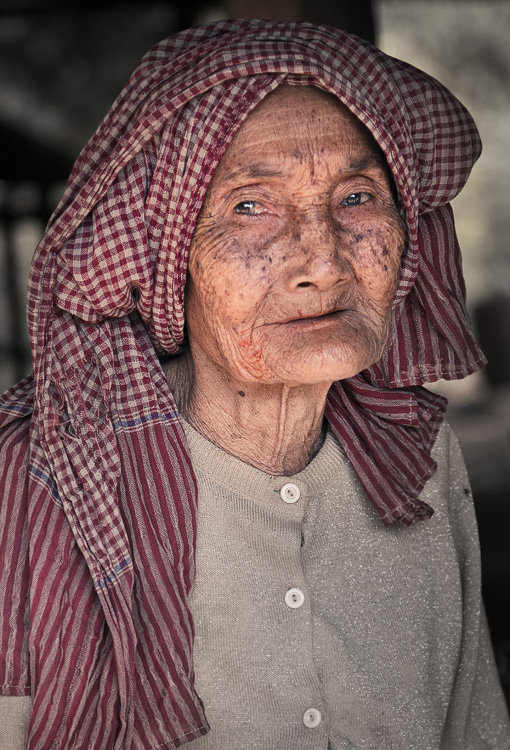 Originally, the krama was a fabric that Khmer women wove themselves. They used to collect cotton (samley) that was then spread before being soaked in rice for 2 or 3 days. Parts of the threads were then tinged in red before starting the weaving. The rich, on the other hand, preferred to use silk because the fabric would remain cool in the summer, but also to distinguish themselves from the peasants. The krama reflected the status of its owner.

A scarf to do everything!

The traditional krama, with small red and white – or blue and white tiles, is available these days in a multitude of colors as you can see with our Angkor Temples collection of cotton scarves or our True Colors collection. Men, women and children wear it, in all areas, and its relevance in everyday life gives it its symbolic value. Its uses are as such: headgear to protect from the sun, swimwear, belts … Robust, it can even turn into an additional bicycle seat for a baby, once tied to both handlebar grips! Finally, children play “Cha-ol Chong” with a curled up krama, a sort of Cambodian equivalent of our dodge ball.

But, of course, Khmers first see this scarf as a piece of legacy, claiming their membership of Cambodia by wearing the Krama.

Former Khmers Rouge sympathizers, or families who supported this regime, are still present in parts of Cambodia. Those people do not mind wearing a red krama. In contrast, those who opposed the regime or have suffered from it can be shocked by such a statement. Even if we tend to remember more recent historical facts, it is important to overcome the legacy of those dramatic years and remember that the krama has older origins.

The Krama is the foremost symbol of a people whose courage and dignity has allowed them to overcome the very challenges it has suffered. This piece of fabric accompanied the Khmers throughout their history and did so for centuries. Faithful companion, always helpful (Cambodian repair their bicycle tires by filling them with kramas!), reliable to the end, this simple scarf alone represents many values which are attached to the Khmers. Today, the country begins rebuilding his society. The younger generation has received the scarf as the legacy and the spirit it embodies.

Through the many patterns of kramas that are now available, one should see the symbol of the revival of Cambodia. The country is changing and these scarves embody the desire of a people that is opened to the world, while maintaining its own values … and of course without losing its smile!

Much love and Positivity LJ x